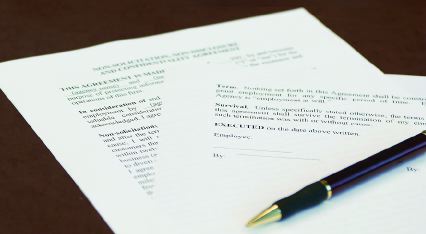 Employers generally like to include arbitration agreements in their employment agreements because it keeps them out of court and away from juries.  There are pluses and minuses when it comes to arbitration that we have discussed previously.  Some arbitration agreements also apply to enforcement of non-compete, non-solicit, and other post-employment covenants.  The United States Supreme Court recently ruled that an Oklahoma court could not address the merits of a non-compete agreement when the contract containing the non-compete contained a valid arbitration clause.  I will leave that analysis to some other folks who have already addressed the ramifications of the Supreme Court’s holding.  Needless to say, the Supreme Court’s ruling further enforces the concept that arbitration clauses contained in employment contracts will be enforced.

What struck me about the opinion is the inter-play between injunctive relief (temporary restraining orders, injunctions, and permanent injunctions) and arbitration.  In most non-compete cases, the employer is dealing with an employee that is actively competing or soliciting customers in violation of their contract.  The employer needs immediate relief.  In most cases, a court as opposed to an arbitration panel, is in a better position to provide that immediate relief.  The reasons for this are pretty simple.  Arbitration panels generally are not set up to provide quick injunctive relief.  In fact, it will usually take several weeks and sometimes months to actually compose an arbitration panel.  Courts, on the other hand, are set up to deal with injunctive relief and do so regularly.

Please consult with a lawyer before you attempt to draft this type of an agreement.  It is somewhat complicated because the employer is trying to have its cake and eat it too.